Don’t get too excited, but it does appear that Samsung has created the ultimate smartwatches, at least for those of you who prefer an Android smartphone – although it’s worth noting that they are also compatible with iOS devices.

From the way they look, to how they function, to their comprehensive range of practical apps built into both devices, the Samsung Galaxy Watch and just-launched Galaxy Watch Active2 deliver everything you could hope for, and in style...

So, with the focus already on style, you’ll instantly see that the Galaxy Watch features an innovative design – in that it looks distinctly like a more traditional watch. This instantly offers something different to those of you sniffing out a deal on a new smartwatch, and wearers of the 42mm and 46mm versions can switch between detailed clockface and digital display designs with ease.

The Samsung Galaxy Watch Active2, available in 40mm and 44mm designs respectively, is sleeker in appearance, but still features the touch-sensitive bezel that allows a seamless transition between traditional and digital clockfaces.

It’s worth noting that the predecessor to the Active2, the Samsung Galaxy Watch Active, doesn’t feature the wonderfully tactile rotating bezel, but is a cheaper option. 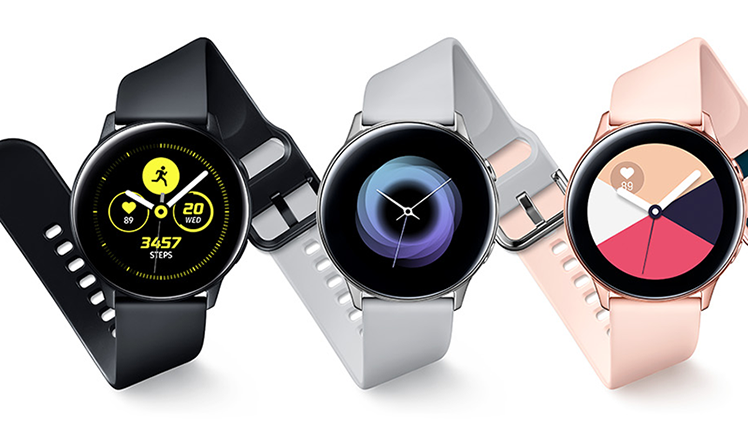 With the Galaxy Watch resembling a more traditional watch, then, it makes sense that Samsung has packed it with one of the longest-lasting battery lives of any smartwatch on the market. With a 270mAh battery in the slightly smaller model, you can expect three days without charges, while the 46mm model, with a 472mAh battery, lasts an extra day.

The Active2, available with 247mAh and 340mAh batteries, will last between two and three days, depending on whether you’re wearing the larger or smaller model and your usage. However, with Samsung Power Share, you can also charge your Galaxy Watch or Active2 by transferring battery life from your Galaxy S10 or Note 10 device.

If you prefer to listen to your music on Spotify (not to mention via an Android device), you’re in for a treat when you purchase a Samsung smartwatch. Playlists can be downloaded directly to the devices, allowing for data-free listening, and there are also Twitter, YouTube and Uber apps readily available, with plenty more downloadable via Tizen’s app store.

Naturally, as smartwatches are made for active people primarily, there is a whole host of high-end versions of the most popular fitness apps on the market, including MapMyRun and Endomondo. S Health is Samsung’s own in-built health app, with which users of Samsung smartphones will already be very familiar.

The Samsung Galaxy Watch comes in 1.3” (33mm) and 1.2” (30mm) models, attached to interchangeable 22mm and 20mm straps respectively. Standard colours available are Silver, Midnight Black and Rose Gold, although mix-and-match options are available if you order directly from Samsung. Standard retail prices start at around £279 for the smaller model and £299 for the 1.3” (33mm) model and its longer-lasting battery life.

Finally, the Samsung Galaxy Watch Active2 comes with an impressive 1.4” (35mm) or 1.2” (30mm) display, with prices of both devices starting at £269. Prices for all of these devices will go up, by a little over £100, if you choose the fully 4G-connected smartwatches over the Bluetooth-only options. 4G connectivity, of course, will allow wearers to use data from a mobile broadband provider directly, without having to keep their mobile phone handy or stay connected to Wi-Fi.