Review Of The Apple Watch Series 4

When the first Apple Watch went on sale in 2015, it didn’t quite usher in the same kind of revolutionary effect that tech observers had come to expect from Apple’s product lines. Much of the blame could be put on the wearable’s lack of clear focus and purpose.

With that earliest iteration of Apple Watch, now often retrospectively called the “Series 0”, the press were often at a loss as to how to describe it other than as a smartphone for the wrist. However, with successive models, Apple has trimmed away many of the Watch’s superfluous aspects.

No longer does the Watch often come across as a gimmicky and overly expensive fashion accessory. Today, it’s very much geared as a health and fitness device – and the Series 4 brings a raft of changes and refinements which have helped to make this vision more fully-realized than ever before.

Watch out! The design alone is gorgeous

Even before the Apple Watch Series 4 was officially revealed at Apple’s September keynote, leaked imagery revealed its screen to be noticeably larger than that of last year’s Series 4. That increase has allowed Apple to pack a greater amount of at-a-glance information onto the display.

These early revelations might have given you reason to worry. Was the new design going to prioritize functionality over form, leaving you with a clumsily large slab on your wrist? Not so. Apple has managed to increase the display size by over 30% while slimming the overall casing.

The Series 4 is available in screen sizes of 40mm and 44mm, respectively succeeding the earlier Apple Watch options of 38mm and 42mm. The wearable is available in various aluminum and stainless steel finishes, while Apple has continued its previous partnerships with sportswear giant Nike and French fashion house Hermès to produce further, special tie-in models of the latest Watch.

Apple’s ability to cleverly remold the Watch’s design can be largely attributed to the inclusion of an OLED Retina display. Unlike the comparatively primitive LCD screen technology, OLED is a sufficiently flexible material for curved displays, letting Apple tightly integrate the Series 4 screen with the casing.

The heart of the matter

With the Apple Watch Series 2, Apple engineered this amalgam of glass and metal to make it truly swim-proof and tweaked the software accordingly, allowing users to track their swimming exercises and laps. The Series 4 can withstand immersion in water up to a depth of 50 meters.

Like earlier models of the Watch, the Series 4 also allows users to track flights of stairs that they ascend, thanks to the included barometric altimeter. The device also houses electrical and optical sensors for regularly measuring heart rate.

However, Apple has clearly doubled down on the beneficial effects of the Series 4 for heart health. The Series 4 can, for example, read when the wearer’s heart rate is too low – a possible sign that the heart is not pumping sufficient blood around the body.

The wearable can also take account of an abnormal rhythm in the heart – potentially indicative of atrial fibrillation, itself a possible sign of a serious disease or health issue – and so notify you. Especially excitingly, however, the Series 4 is the first Apple Watch enabling the wearer to capture a single-lead electrocardiogram (ECG), which measures the heartbeat’s electrical activity.

The Apple Watch Series 4 is, as Apple proudly revealed at the product launch, the first ECG product of direct over-the-counter availability to consumers. Nonetheless, the FDA – the U.S. Food & Drug Administration – has warned that the wearable’s ECG app is meant strictly for informational use and should not be used in place of traditional methods of diagnosis or treatment. 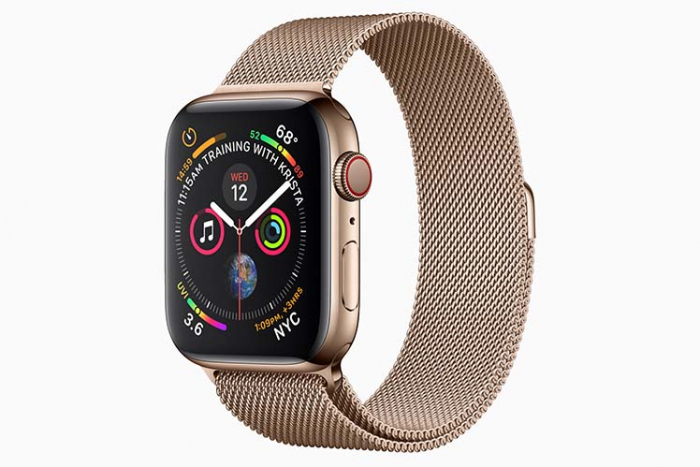 What else appeals about the Series 4?

Another of the Series 4 headline additions is fall detection. Using the built-in, motion-sensing accelerometer and gyroscope, the Watch can detect a fall and, in response, send you an alert. If you are injured, the alert enables you to call emergency services through the Watch.

If the Watch fails to detect movement for a minute following the fall, emergency services will be called automatically due to the device’s SOS feature. The Watch will also notify all of your emergency contacts with details about where you are.

Despite all of the functional additions in the Series 4, it still delivers up to 18 hours of battery life on each charge. However, some activities, like listening to music or making a phone call, will be more draining on the battery life, so be careful.

The Series 4 is, like its predecessor, available in both GPS-only and cellular versions. With an LTE-connected Series 4, you won’t need to tether the device to an iPhone to take calls, stream music and do other typically iPhone-dependent activities. Pricing begins at £279 for GPS-only and £379 if you seek cellular connectivity.