Feature Review Of The Apple iPhone XS and XR

Last year, Apple made no secret of comprehensively tearing up the rulebook for the iPhone, its flagship and easily most lucrative product.

Features which had been staples of the Apple iPhone for years – including the LCD display, thick bezels and Touch ID fingerprint recognition system – were, in a metaphorical sense, left in tattered shreds as Apple showed off the iPhone X.

That phone, with its array of stunningly futuristic features including an edge-to-edge display and Face ID facial recognition system, marked the iPhone’s tenth anniversary. It was also marketed as set to redefine the smartphone itself for the following ten years.

With little of the initial furore surrounding the Apple iPhone X having faded a year later, we probably shouldn’t be surprised that Apple didn’t ready a similarly quantum leap for 2018. The iPhone XS, XS Max and XR are all refinements to a winning formula – so, do they still warrant your dollars?

At its September keynote unveiling the iPhone XS, Apple spent a lot of time boasting about the power and capabilities packed into its new A12 Bionic processor.

This chip, which incorporates a 6-core CPU and 4-core GPU, can deliver 5 trillion operations every second. That’s several times more than the 600 billion per-second operations that last year’s A11 Bionic chip could manage.

The XS also comes with a 12-megapixel wide-angle lens camera on the back, while the software-based Depth Control feature lets you tinker with a shot’s depth of field after pressing the shutter.

Apple has also improved the battery life, adding an extra half-hour to what last year’s X could muster. This means that, from a single charge, you can anticipate roughly 12 to 14 hours with the XS.

The most obvious sore point is the price. Like the now-discontinued original X, it has been given a £999 starting price. Apple obviously isn’t willing to relinquish the iPhone’s place at the far end of the smartphone market – with Samsung’s competing Galaxy Note 9, for example, similarly priced.

However, it does raise the question of whether current X owners should really switch to the XS. The tweaks to the camera software and new gold finish might be the only real draws for many of them, while any units for which Black Friday deals materialize will surely sell out rapidly.

The Apple iPhone XS looks practically identical to the X, with the new gold color the only obvious point of difference. However, this year, to go with the 5.8-inch XS, Apple also announced the iPhone XS Max, so-called as it sports the largest-ever iPhone display at 6.5 inches on the diagonal.

Starting with the iPhone 7 line in 2016, Apple annoyed a few fans by limiting key features – like the dual-lens rear camera enabling Portrait mode for bokeh-like photography – to the larger Plus model. However, rest assured that such a feature discrepancy doesn’t exist between the XS and XS Max.

In fact, in all but physical size and battery life, the two are identical. The Max has a 6.5-inch display compared to the 5-inch panel of the vanilla XS. This puts the Max close to tablet territory, so it’s disappointing that many developers have yet to optimize their apps for the larger display.

Apple has also held off extending iPad multitasking features like Split View and Slide Over to the Max – for now. However, the 6.5-inch display allows for more immersive video and gaming experiences, while you can eke about 13 to 15 hours of battery life out of a single charge.

With a base price of £1099, the Max is the priciest-ever Apple iPhone – though, if you can act quickly on an intriguing Black Friday deal, you might be able to cancel out that £100 difference. 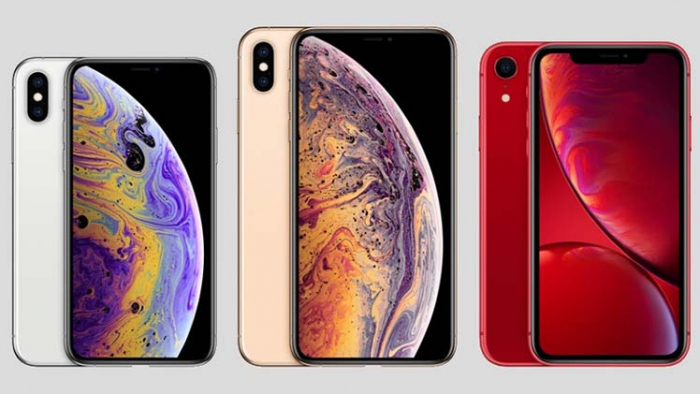 Just as you might have been reaching into your wallet to start counting your dollar bills in preparation for an XS or XS Max purchase, Apple just had to throw an extra spanner into the works. That “spanner” is the iPhone XR, which largely matches the XS in features at a much lower price.

Those features include the same A12 Bionic chip, rear camera – minus a telephoto lens – and 7-megapixel front camera enabling Face ID functionality. The inclusion of the TrueDepth Camera system, which supports those much-loved Animojis, gives the XR a familiar notched design.

However, as the XR’s display is an inflexible LCD variety, its bezels are slightly larger than those of the XS. Those bezels encircle a 6.5-inch Liquid Retina display. The Apple iPhone XR also betters the XS in battery life – which, for the XR priced from £749, is in the region of 15 to 17 hours.

The XR is also available in the colors of black, white, yellow, blue, coral and red, while the XS line is limited to silver, space grey and gold.

Comment on Feature Review Of The Apple iPhone XS and XR